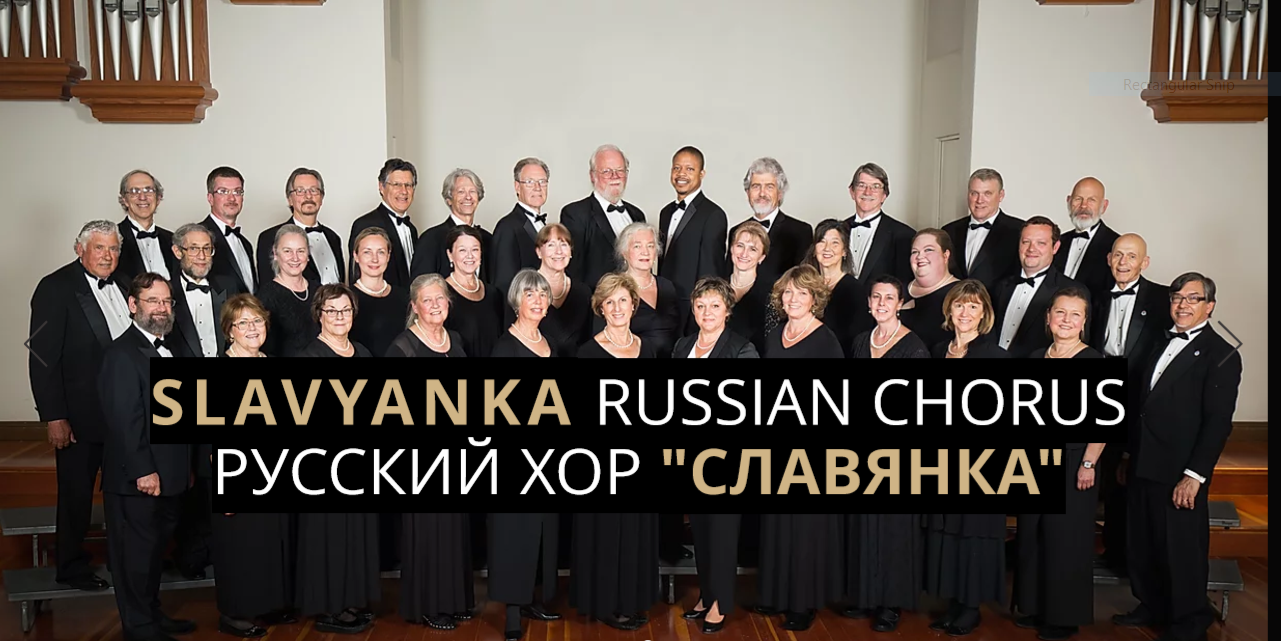 Welcome to our Chorus website. Use the Menu to explore who we are, our history, what we do, review our 40 glorious years of concerts, listen to selections of our recorded music and recent full concert videos. Meanwhile while we all mutually struggle with the COVID 19 pandemic, our concert schedule is unknown. We continue our rehearsals via video/audio conferencing to be prepared for concert performances beginning, hopefully in late 2020 or early 2021. CONTACT US here at anytime. Financial support, at this time, is especially appreciated. Donations can be considered and made here DONATE.

Reflecting the name given by early Russian settlers to what is now called the Russian River in California, the Slavyanka Russian Chorus was formed in 1979 by several former members of the Yale Russian Chorus. The repertoire comprises music principally from Russian and other Slavic sources -- from Tchaikovsky and Mussorgsky to many less-well-known composers, and folk music.

We are a community of singers, alumni singers, supporters, and listeners – people like you who come because they love and are moved by what they hear.

For 34 years, the Chorus was a men's chorus that was joined on occasion by female soloists and women's ensembles.

In 2013,, the Chorus officially expanded to include women. Our repertoire now includes music for mixed ensemble and women's voices, as well as distinctive men's choral pieces.

The Chorus performs extensively in the Bay Area (around 12 concerts annually), and was privileged to be invited to tour and perform in the former Soviet Union and Russia in 1986, 1989, 1999, and 2016.

The Chorus has released eight albums, has appeared on Bay Area television segments, contributed to the PBS documentary Spirit of a People, A New Portrait of Russia, and has recorded music for several movies: Tell Me a Riddle (1980), Little Odessa (1994), and What Dreams May Come (1998).

A Board of Directors, Managers and volunteers manage the Chorus

Instagram
Home
Donations
Members, Alumni and Guest Singers
About Us
Our Beginning 1979 - 1993
Slavyanka 40 Year Legacy
Slavyanka 40 Years of Glorious Concerts
Slavyanka Captured Memories
Our Music
Chorus Repertoire
What We Do
Our Vision & Mission
Leadership
Contact Us